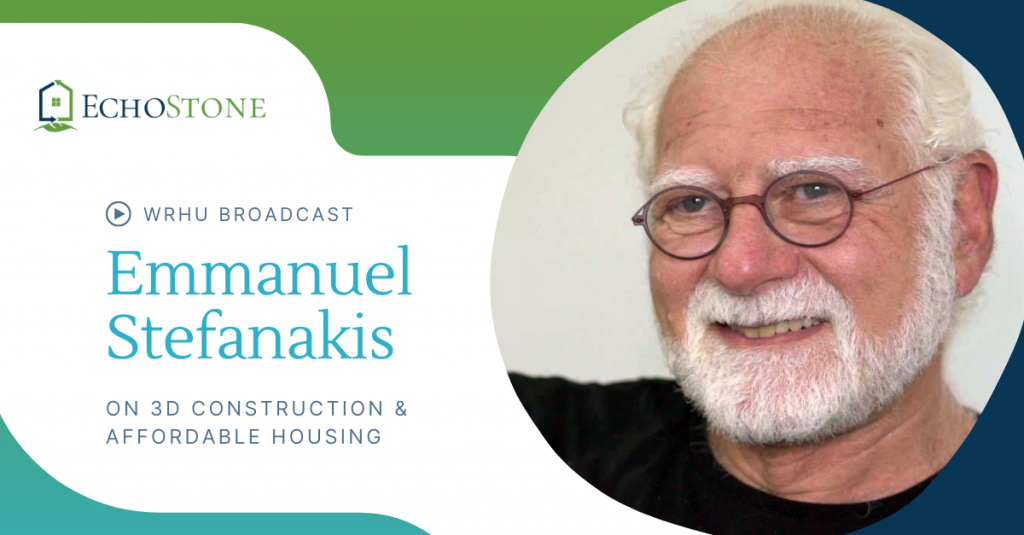 This past week, EchoStone’s Chief Sustainability & Product Development Officer, Emmanuel Stefanakis, was asked to join a conversation on the affordable housing shortage and 3D printing.

The conversation explored the alternative building technology’s potential in the affordable housing market, to accelerate construction as well as reduce associated costs of new construction.

Listen to the audio recording, or real the transcription below.

Last week, I did an in depth interview with multiple people involved with the first 3D printed sold on Long Island. This week, I got to speak with Emmanuel Stefanakis from EchoStone Housing and Rick Abbiati Owner of Colony Property Investments LLC. Stefanakis and EchoStone Housing have developed a process which can build houses in faster than normal times. Here’s what he has to say,

“We had a demonstration project recently in Nigeria, where we just completed 252 houses, and the demonstration project showed that we could build at a phenomenally fast rate. We could build a home in 14 days, from the initial shovel in the ground to the furnishings, down to spoons in the drawer – in 14 days. This is in a place, which often took 4-6 months to build the same house. So, we’ve applied our technology to build rapidly and sustainably.”

Stefanakis sees the 3D printing technology as a growing play in the construction world.

“Absolutely, as I stated earlier, there’s such a large deficit that there’s a place in this market for a variety of technologies. I do see 3D technology is still kind of, very early stages, but I see kind of a hockey stick curve in terms of its applicability.” He does however site some issues with this technology. “The problem with 3D printing, as it is with other technologies, is the high cost of ramping up. To buy the robotic infrastructure is expensive and prohibitive for certain types of affordable housing.”

A big problem with the affordable housing issue in America is the lag of construction behind demand. Rick Abbiati sites a few reasons for this,

He also feels like current construction processes are not meeting the needs of the people.

“Oh, absolutely not. The demand is almost gotten out of control. There’s very high demand, very little supply, which is driving houses – they’re much more costly.”

The development of 3D printing houses can shift the construction demographic as a whole. Here’s what Abbiati believes will happen,

“That’s a great question, the construction workers themselves may shift more toward renovation, rather than new construction. I think that will be many, many, years to come. However, the trades such as electrical, plumbing, windows, roofing, HVAC, Heating, those kind of workers will still be needed for the 3D printed homes.”

Thank you once again Emmanuel Stefanakis and Rick Abbiati for their expertise on this very pressing topic. For WRHU, I’m Daniel Gall.

EchoStone provides sustainable housing systems that make affordable housing more profitable for developers around the world. To stay up-to-date with the latest from EchoStone, subscribe to our mailing list.