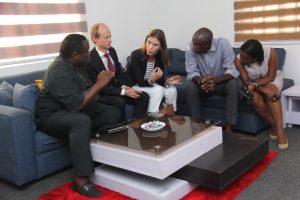 As the Federal Government of Nigeria and most of the states including the Federal Capital Territory (FCT) Abuja, combating with the nation’s high housing deficit, Sweden Ambassador to Nigeria, H.E Carl Michael Gräns has reiterated Swedish continuous partnership with EchoStone Nigeria, in providing affordable housing solution to Nigerians. The current Managing Director/CEO, Federal Mortgage Bank of Nigeria (FMBN), Ahmed Musa Dangiwa had put the country’s housing deficit at 22 million units; and the bulk of that is in urban areas — Lagos, Port Harcourt and Abuja. But speaking with the newsmen after inspecting a prototype of the EchoStone two-bedroom bungalow, at the Government Technical College, Agidingbi, Lagos, Michael Gräns was amazed that the firm could build houses in 14 days, which is cheap, eco-friendly and available for people in such a short time. Commenting on the Swedish partnership with EcoStone Nigeria, he said that the machine uses in making the concrete in building the more eco-friendly houses came from Sweden, however, pointed out that it is a very good venture between Swedish, American and Nigerian. While responding to questions on the impact of the partnership in reducing housing shortfall in Nigeria, he said: “The impact will be great, because, with the modern technology used in building the houses, EchoStone can deliver 50,000 homes a year, and half a million houses in 10 years. And for a city like Lagos that is growing very-very fast, it can really make an impact, and it is already spreading to other states, such as Kaduna State, which I think is very promising.” While reacting to the likely Swedish support to Nigeria in tackling the nation’s high housing shortfall, the Ambassador noted that there were discussions around that recently, adding that he met with different Swedish companies, and had discussed with financial solutions in addressing the housing gap in the country. “If you have a good project, you would have to find a solution in financing these projects, it could be investments, which is what we are looking into, and there are different state institutions in Sweden that could help with financing guarantees, in order to make these kinds of projects go real,” he explained. 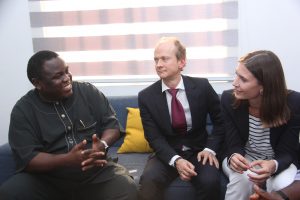 Although, he never mentioned any expected figures from the Sweden financing, but said that it might sometimes be difficult in getting such financing from commercial banks. “So you need some guarantee perhaps from the states, and there several institutions in Sweden,” he stressed. Explaining the rationale behind the project, Director of EchoStone Nigeria, Sammy Adigun said the idea behind the company is to solve affordable housing problems, aimed at delivering to low-income earners, which comes with full infrastructure and built with modern technology that makes it sturdier. The Director, therefore, reinstated that EchoStone would meet the housing needs of Lagos residents and Nigeria at large with the support of all the relevant stakeholders, without compromising the quality which would last not less than 100 years. According to him, it is cheaper in the long run because it would save you 40 per cent carbon footprint, which is your water saving, energy saving, heating or cooling saving. Because the houses are 7 degrees cooler inside, for instance, if your outdoor is 25 degrees and your room is 18 degrees, you might not even need air-conditioning and you would be okay with a fan. “So, those savings are what create a sustainable environment. And we are building the first green estate in Lagos, which would be commissioned in March, and we are spreading it all over the country,” he disclosed. Clarifying enquiry about the firm’s target for 2019, Mr Adigun pointed out challenges, such as home ownership, explaining that is why the firm is partnering with countries across the world. “For instance, salaries are poor, and to own home such as this, you need to earn up to N180, 000 a month, after which the nine million naira home would be provided for you. But those who earn 180,000, sometimes, have to compete for demand to be able to remove N60, 000 from their salaries.  “Our research and market studies have shown that affordability is the main challenge, and that is why we are working with developed nations in Europe, America and in the Middle East to actually bring in capital to solve this home ownership problem. In fact, the major challenge is how to buy and not how to build,” EchoStone Director clarified. Meanwhile, efforts to address three million housing deficit in Lagos has begun to yield positive results, as the Lagos State Government (LASG) and EchoStone Nigeria are now ready to deliver the first Joint Venture (JV) housing scheme under the administration of the Executive Governor, Babajide Sanwo-Olu. The collaboration, which is targeted at providing 100,000 homes in five years in Lagos, started with the construction of 2,000 housing units in three Local Government Areas (LGA) of the state, Idale in Badagry; Ayobo in Alimosho LGA and Imota in Ikorodu LGA. EchoStone Nigeria has, however, concluded the construction of the 252 units of two-bedroom flats in Idale Badagry LGA of the state, and now ready for commissioning in March, as part of its ongoing projects to drive mass housing delivery in the state. February 4, 2020
February 1, 2020 EchoStone International, Nigeria affordable housing, investment, nigeria, swedish, swedish ambassador, technology
Share