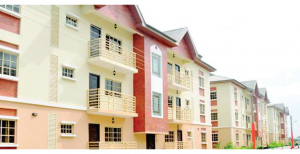 A property development firm, EchoStone Nigeria Ltd., in conjunction with the Lagos State Government yesterday laid foundation for speedy construction of 2,000 housing units in three Local Government Areas (LGA) of the state. News Agency of Nigeria (NAN) reported that EchoStone was deploying a new technology that would allow construction of several houses by the day. Already, the firm had begun the project which would drive mass housing delivery in Lagos with the construction of 250 units of two bedroom flats in Idale in Badagry council area. The ground-breaking event for the Badagry estate was held at the Lagos State Vocational Education Centre compound in Agidingbi where EchoStone began construction of a prototype. The ground-breaking event was organised by EchoStone in collaboration with the Lagos State Ministry of Housing. EchoStone would construct a total of 2,000 housing units and upon completion of the Badagry estate would move to Ayobo in Alimosho LGA and Imota in Ikorodu LGA. Speaking at the groundbreaking ceremony for the 250 units of two bedroom flats in Idale, Badagry, EchoStone’s Global Chief Executive Officer, Mr Anthony Recchia stressed the need for industrialisation of housing. Recchia said that rapid urbanisation and population explosion in Lagos required radical construction which the technology was using to bridge the huge housing deficit of over three million in the state. He said that construction had not evolved in the last 50 years and that industrialisation would bridge huge demand gap, saying that the mortgage institutions could effectively drive the supply. “What we really need is the industrialisation of labour, along with the technology to create the asset which then produces the mortgages,’’ Recchia said. He said that four flats would be constructed daily on the Badagry site for 14 days, noting that, the entire project on the 10 hectares would be completed within three months. Recchia said that training of local artisans had started to ensure skill transfer to residents of Lagos, saying that the project was also creating jobs in the state. “Mostly what I see on the job side is that it is gender neutral; of men and women working together with women running the machines and helping with the form-works,’’ he said. Mr Ander Lindquist, EchoStone Co-Founder, while making a slide presentation of the technology said that the form -works used eliminated time wastage and allowed opportunity for construction of a minimum of eight homes daily. Lindquist said that the technology also provided 7.5 per cent lower temperature in the homes; thereby reducing the need for air conditioners. He said that electrical and plumbing fittings alongside other accessories were done simultaneously with the construction; thereby ensuring durability of the facilities for over 50 years without maintenance. Lindquist said that the firm was also going to include facilities like green areas, power supply, street lights, sewage reticulation, car parks, among others to the estates. Lagos Commissioner for Housing, Mr Gbolahan Lawal, said that the project was part of the “global mission“of Governor Akinwunmi Ambode’s administration to construct 20,000 houses in all parts of the state in four years. December 23, 2019
November 30, 2018 EchoStone Nigeria affordable housing, badagry, echostone, nigeria, state of lagos
Share